Bedlam Paintball Exeter have created Twelve purpose built Paintballing games zones and set with 120 acres on an ancient iron age encampment, earthworks and woodland that is totally unique. Crackshots Paintball Exeter is one of the South West?s leading outdoor paintball centres, only 15 minutes from Exeter City Centre, we cater for any group size, from ages 6 upwards with laser tag and 11+ for paintball games.

We use the latest combat equipment, Freshly laundered Overalls for all sizes from Small to XXXL. We?re also the only site in Devon that can offer the largest amount of Upgrade Guns, top of the range tournament style guns with 18 balls per second fire power available to all!

Play paintball in a fabulous, historic setting at Paintball Exeter – Devon’s best paintball facility.  Whether you’re looking for an ideal venue for a hen, stag, or birthday party, or want a unique take on corporate or school team building activities, Paintball Exeter is the place to be.

Paintball Exeter is the South West's leading paintballing venue. Come along and experience the thrilling, adrenaline-fuelled game for yourself! Situated in 50-acres of woodland, this site is just a short ten-minute drive from Exeter city centre.

What can you expect?

Kitted up in your padded coveralls and armed with the very latest paintball marker-gun, you will run screaming at your opposition, adrenaline rushing through your veins. Nothing will get in your way as you storm enemy lines, run over bridges, and dive into bunkers to become victorious.

You'll love our fantastic, realistic Game Scenarios - including Amazon, Zulu, Hamburger Hill and The Maze - which make you feel like the star of your very own movie.

Paintball Exeter is home to an abandoned village where your enemy have made their base.
Your team has been sent to make sure every building is cleared and your opponents are defeated in their attempts to overrun the development.
Send your stealthiest players to secretly source where the enemy holds their position and how strong their defences are.
From here, the rules are simple. Flush them out, clear the area and regain control. Be warned, the opposition have plenty of hiding places and are likely to appear at any moment and from anywhere.
This game zone is brilliant for creating solid team tactics, perfect for team building or corporate days. 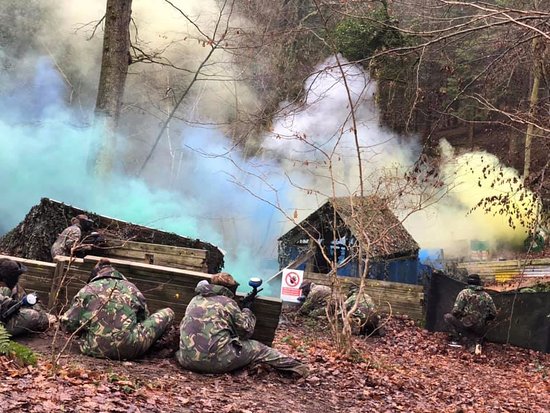 Get your team’s camo paint out for this assault on the enemy through the thick woodland surrounding Paintball Exeter.
You have been sent to destroy the enemy’s paintball HQ and capture these outlaws before they become too powerful to overthrow.
Quietly but quickly guide your team through the advance and towards the enemy. Decide whether to storm in and lay down heavy paintball fire or pick them off one by one from the undergrowth.
Amazon is designed for players who prefer a slower style of play that uses stealth and agility. Great for those who enjoy stalking and sniping the enemy. 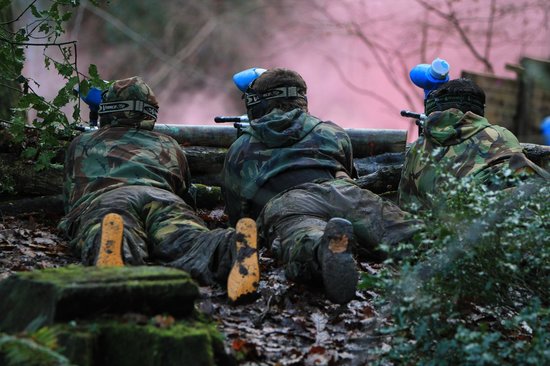 Paintballing Exeter’s Castle scenario is a classic attack and defend style of game which is designed to suit every level of player ability.
Your team’s mission is to storm the enemy base within the heart of the castle. Break through the outer doors with force. Once inside, remind your team that the enemy could be lying in wait around any corner.
Communication is a vital tool as you send your paintball squad along different routes to clear the enemy hiding in the shadows. Wasting shots isn’t an option so your team needs to be cautious and accurate with their shots.
This zone is a challenge for any paintball player so your team needs to work together to support those less experienced.

Defend your fortress against a team of crazed Zulu paintballers who want to drive you off their land.
Paintballing Exeter’s Zulu scenario is designed for players who love to get in character during their paintball battles.
Coach your team that there is no surrender against the enemy as they launch a upfront attack at your base doors. You need every player to perform in their role so your team can survive this onslaught.
Send your sharpest shooters to the fortress walls while your quickest players can flank the enemy from behind.
Our Zulu game zone isn’t for the faint-hearted, but is great for stag or hen dos to get the exhilarating rush of a close quarter battle.

If you're looking for an exciting day out in Exeter or Devon, Paintball Exeter is the place to be.