Bob Gurnsey: The Godfather of Paintball

I talked about paintball’s big 30th birthday on Monday but I never really mentioned how it all started. The history of paintball is pretty easy to find online to be honest, so instead I’ll just focus on the guy who made it all a reality: Bob Gurnsey.

After his friends Charles Gaines and Hayes Noel approached him to join their small but growing club, the three of them sat down and wrote up the rules and ideas behind the modern game of paintball. They used the basic ‘Splotchmarker’, or ‘Nel-spot 007’ as it was known, which was a marker invented for marking trees and even cattle. Thank goodness someone eventually found a better use for it! From here Gurnsey became known as the father of paintball and saw its real commercial potential when he launched The National Survival Game Inc, which was the initial basis for every game zone ever created.

Gurnsey has since made regular appearances at paintball industry conferences and seminars, but this summer he is set to present the Lifetime Achievement Award to some lucky paintballer at the 2011 Paintball Festival and Business Conference in Pittsburgh.

Not only this, but the great man himself plans to follow up the conference with a tour through New Hampshire to visit some of the original spots where paintball was invented; including where the first ever game took place. What’s more, apparently there are some places up for grabs to join the guy on the road too! 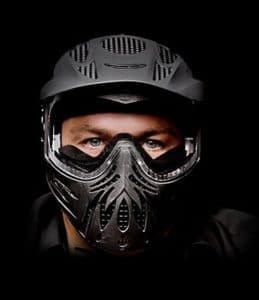 Bedlam is the UK’s foremost paintball, lasertag &  splatmaster company, with premier venues in the Edinburgh, Glasgow, Aberdeen and Dundee areas, as well as over 120 affiliate sites across the UK.

Bedlam Paintball UpdateThe Bedlam booking office is OPEN and we are looking forward to welcoming you all back.

Scottish Government guidelines have Permitted that Paintball is  exempt and is an activity that can still be attended by groups .

All our venue are fully Covid secure.

Bookings during the week require at least  12 players depending on the venue.

We look forward to welcoming you all back very soon!